Over the last ten years I've worked closely with major brands and businesses including Yes Theory and Tuff Toe, institutions such as Milan Art Institute and ASU, and local soccer clubs, medical marijuana doctors, and more. Here are some of my pieces I'm exceptionally proud of.

With a sense of adventure, this trio has built a brand for themselves on YouTube. Yes Theory is their name, seeking discomfort is their game.

With 5+ million subscribers on YouTube, these YouTube stars have grown their brand by displaying themselves in the throes of crazy situations: jumping off a helicopter with Will Smith, tricking the world into thinking Justin Beiber ate his burritos weird... and more! They offer discovery, exploration and above all else, the world around us. They've recorded themselves exploring the world's largest pyramid, and they've also taken to hosting an online talent show amid the corona virus pandemic. They... sorta do it all.
‍

In 2020 Yes Theory approached me and asked me to created their newest vision: a website for their podcasts. They wanted a redesign with a fresh look, a bold personality, and something that screamed "Yes Theory".

I happily obliged and delivered a custom website that helped further their vision, with a unique 'home icon' that expands into their social medias upon clicking. 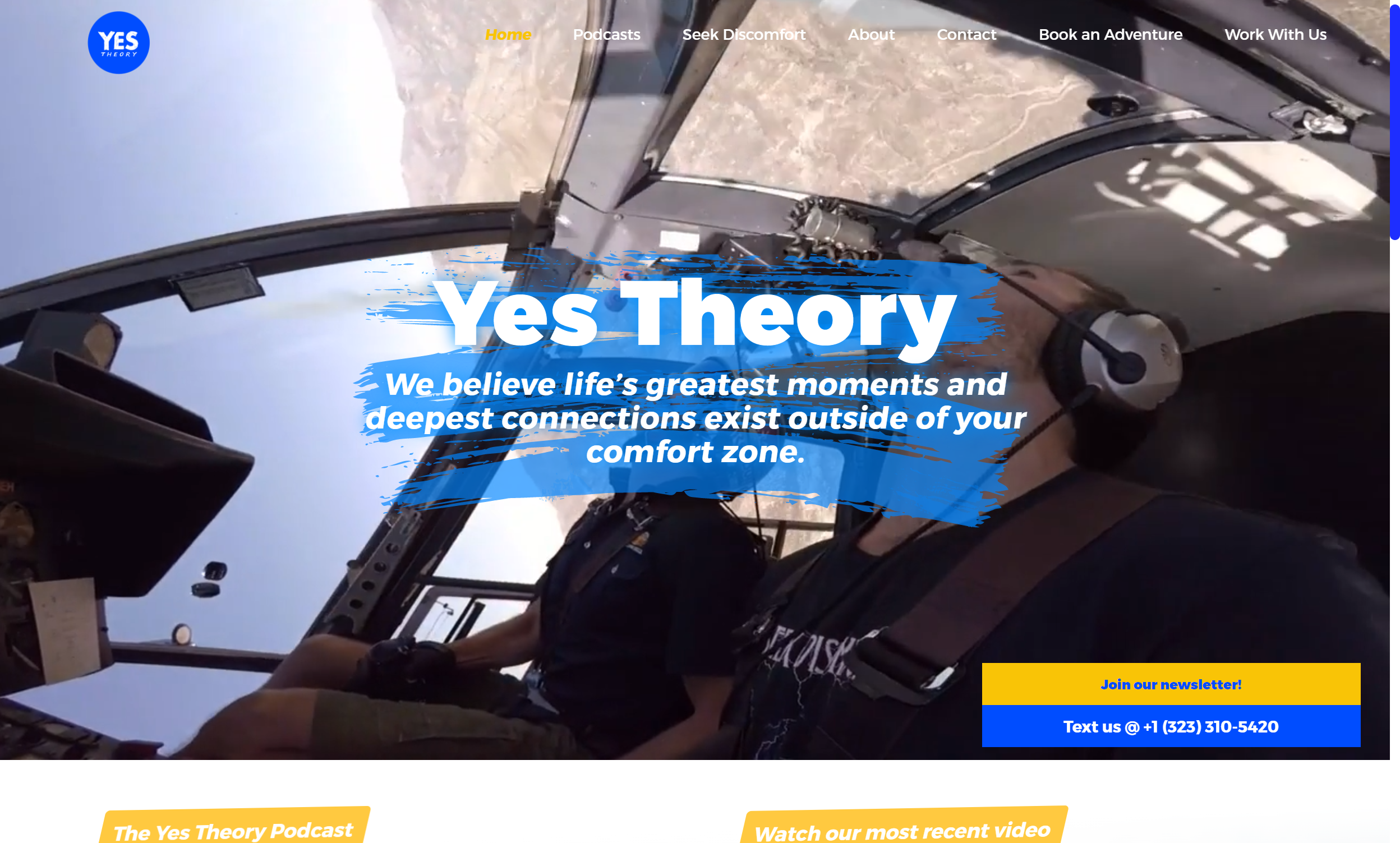 Tom French owns and operates USAmericana.com, the leading store in US memorabilia and US historical artifacts.

It's a niche community, but the stores that do it right thrive. Collecting US memorabilia has been an integral part of Tom's life: but selling it has been where he's made his living. After coming out of retirement - for his second time - he asked me to help him give his site a little love.
‍

There were some margin spacing for his sidebar that I was quickly able to fix, and his footer had an interesting white space that left an unslightly appearance. After some wireframing, we then tackled the home page.
‍

A montage sits on top of the landing page, above the fold, providing to the audience that's visiting his site a broad overview of his inventory. Below that, and in the same breath, he offers to his audience the luxury of being alerted every Wednesday for new and routine listings. Something that accounts for 90% of his sales.
‍

His store has been set up to only show products that are visible; since most of his inventory is rare and unique, its important that only products in stock are displayed.
‍

Art is a creative form of energy and exists in between the black and white binary we're so familiar with. If you're an artist who likes working with oil and enjoys drawing, Art Milan Institute can help you tap into the in between.
‍

When Milan approached me they were having an issue. A lot of their students register online, and during registration period, it's a huge problem if the ReCaptcha doesn't work on their registration form. And that's exactly what was happening. An update through WordPress rendered a plugin outdated. Without the ReCaptcha correctly working, no sign ups were getting through to their customer database.
‍

I was able to quickly fix the problem, and things went back to normal. This allowed for Milan to resume standard operations. They may have missed out on some registrations, but they were able to recover some costs on their annual trip to Milan.
‍

Apart from that main problem being fixed, some email work was performed on their back end. I went through their DNS and updated some SPF information that helps eliminates spam.
All in all, Milan Art Institute was in better shape when I left than when I found it
‍